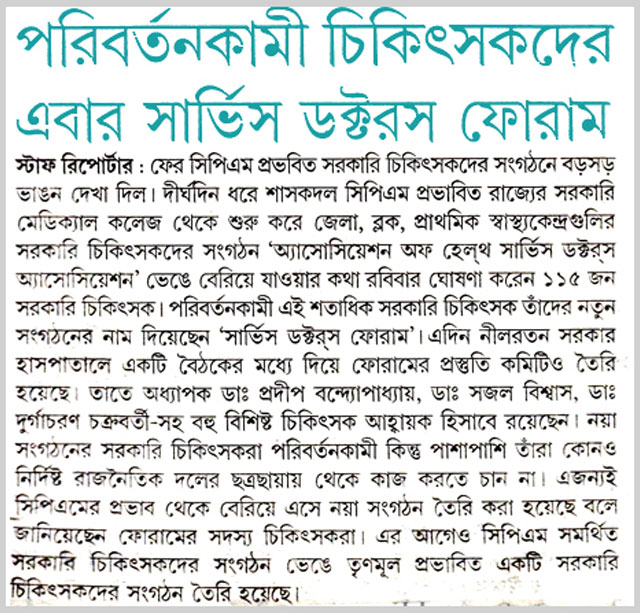 Since early years of this century, doctors of Government Services felt an urgent necessity of a platform for Service doctors which will be distinctive in its ethics, values and principles from other existing organizations. Obviously the question was that in spite of so many Service doctors’ organizations existing within the system, with similar type of priorities regarding work among Service doctors, what is the need for formation of another entity.

The much deliberated answer to this was the idea of forming an distinctive organisation, which shall unite all those who are concerned with providing health services to the people in order to address the problems in the working environment of Government Health Services, security of doctors’, to uphold the right of the Service doctors’ & People’s health, and not for any personal privileges. It was felt that all other existing organizations of service doctors’ were basically wings of the ruling political parties (Central or State), therefore their activities were mostly prejudiced towards serving the purpose of their political ideologies and not for the betterment of the Service doctors’, patient and people’s health concerns.

When we started our work, it was the best and worst of times for such an initiative. The then Government of West Bengal was led by the so-called left front for the last thirty years and had undertaken the policies of commercialization which was part & parcel of Globalization, Privatization and Liberalization. Their policies were bringing the control of medical sciences into the hands of national & international corporate houses. Medical profession was being converted into a commodity to be sold to the highest bidder and not seen as a fundamental right of the People. The prevailing system was preventing the fruits of science from reaching the toiling people. These policies inevitably created a fear & autocratic environment within the health service field. Meanwhile, the dominating service doctors’ organizations took a pro establishment stand that did not protest against these policies rather indirectly supported and propagated them which made health services anti-people and anti-doctors. Thus, there was this immediate need of building up a potent and effective doctors’ movement throughout the state of Bengal. Thus, was the emergence of Service Doctors’ Forum (SDF).

We believe that the onus lies upon us to raise the voice, to forge the unity of service doctors’ and fraternal organizations bearing similar aspiration, to launch a united peoples’ health movement. This can only safeguard peoples’ right to Health, along with the right of Service doctors’ by compelling the concerned governments to implement “Health for All” through pro-people health care delivery system in reality. We shall have to struggle against all odds for the upliftment of medical ethics and morality not in words but to be practiced in day to day life taking inspiration from the lives and struggle of the pioneers of medical profession who are worldwide regarded as the epitome of ethical values, selflessness, utter devotion and great sense of responsibility towards the people.

We promise to hold high the banner of ‘doctor-patient’, ‘health workers-ailing masses’ unity that is now shattered in our moribund society with misunderstanding, misbehavior and other odds. In this respect, we are obliged to quote the words of the great internationalist revolutionary Dr. Norman Bethune, “The situation which is confronting medicine today is a contest of two forces in medicine itself. One holds that the important thing is the maintenance of our vested historical interest, our private property, our monopoly of health service distribution. The other contest that, the function of medicine is greater than the maintenance of Doctor’s position, that the security of people’s health is our primary duty that we are above professional privileges.” 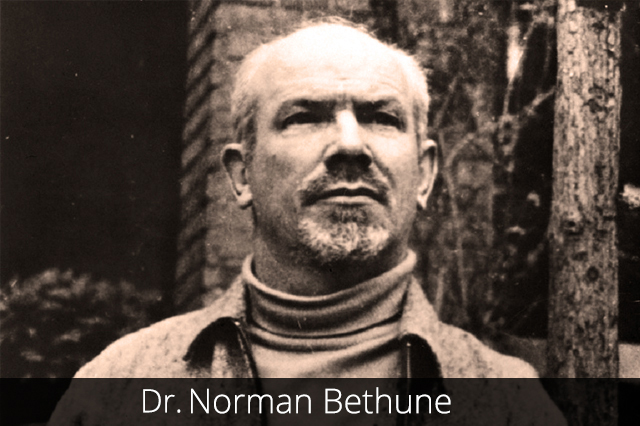 Henry Norman Bethune was born in Gravenhurst, Ontario, Canada on March 4, 1890. He attended Owen Sound Collegiate Institute in Ontario and graduated in 1907. In September 1909 he enrolled at the University of Toronto but interrupted his studies for one year in 1911 to be a volunteer laborer-teacher with Frontier College at remote lumber and mining camps throughout northern Ontario, teaching immigrant mine laborers how to read and write English.

In 1914, when World War I was declared in Europe, he once again suspended his medical studies. In a flourish of patriotism he joined the Canadian Army's No. 2 Field Ambulance to serve as a stretcher-bearer in France. He was wounded by shrapnel and spent three months recovering in an English hospital. When he had recuperated from his injuries, he returned to Toronto to complete his medical degree. He received his M.D. in 1916. In 1917, with the war still in progress, Bethune joined the Royal Navy as a Surgeon-Lieutenant at the Chatham Hospital in England. In 1919, he began an internship specializing in children's diseases at The Hospital for Sick Children at Great Ormond Street, London. Later he went to Edinburgh, where he earned the FRCS qualification at the Royal College of Surgeons.

In 1926 Bethune contracted tuberculosis. He sought treatment at the Trudeau Sanatorium in Saranac Lake, New York. In the 1920s the established treatment for TB was total bed rest in a sanatorium. While convalescing Bethune read about a radical new treatment for tuberculosis called pneumothorax. This involved artificially collapsing the tubercular (diseased) lung, thus allowing it to rest and heal itself. The physicians at the Trudeau thought this procedure was too new and risky. But Bethune insisted. He had the operation performed on himself and made a full and complete recovery. From 1928 to 1936 Bethune perfected his skills in thoracic surgery and developed or modified more than a dozen new surgical tools. His most famous instrument was the Bethune Rib Shears, which still remain in use today. He published 14 articles describing his innovations in thoracic technique.Bethune became increasingly concerned with the socio-economic aspects of disease.

As a concerned doctor in Montreal during the economic depression years of the 1930s, Bethune frequently sought out the poor and gave them free medical care. He challenged his professional colleagues and agitated, without success, for the government to make radical reforms of medical care and health services in Canada. He was an early proponent of socialized medicine and formed the Montreal Group for the Security of People's Health. In 1935, Bethune travelled to the Soviet Union to observe firsthand their system of healthcare. In January 1938 Bethune travelled to Yan'an in the Shanbei region of Shaanxi province in China. There he joined the Chinese Communists led by Mao Zedong. There Dr. Bethune performed emergency battlefield surgical operations on war casualties and established training for doctors, nurses, and orderlies. He did not distinguish between casualties. Stationed with the Communist Party of China's Eighth Route Army in the midst of the Second Sino-Japanese War, Dr. Bethune cut his finger while operating on a soldier and contracted septicaemia (blood poisoning) and died of his wounds on November 12, 1939. His ideals can be summarised as “.....Let us take the profit, the private economic profit, out of medicine, and purify our profession of rapacious individualism ... Let us say to the people not “How much have you got?” but “How best can we serve you?” 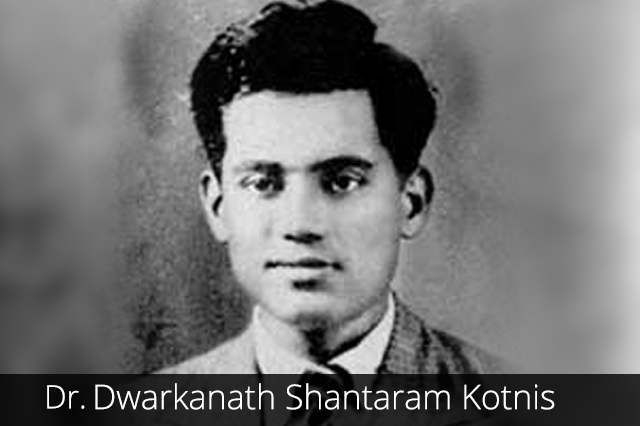 Dwarkanath Shantaram Kotnis, also known by his Chinese name Ke Dihua was one of the five Indian physicians dispatched to China to provide medical assistance during the Second Sino-Japanese War in 1938. He was born to a middle class Marathi family in Sholapur, Maharashtra on 10th October 1910. He studied medicine at the Seth G.S. Medical College[of the University of Bombay. Known for his dedication and perseverance, he has been regarded as an example for Sino-Indian friendship and collaboration.

In 1938, after the Japanese invasion of China, the communist General Zhu De requested Jawaharlal Nehru to send some physicians to China. Netaji Subhash Chandra Bose, the President of the Indian National Congress, made an appeal to the people through a press statement on 30 June 1938. He arranged to send a team of volunteer doctors and an ambulance by collecting a fund of Rs 22,000 on the All-Indian China Day and China Fund days on 7–9 July. Netaji Subhash Chandra Bose also wrote an article in Modern Review on Japan's role in the Far East and denounced the assault on China.[1] The key aspect of this mission was that it was a helping hand from a nation itself struggling for freedom, to another nation also struggling for its freedom. The mission was reinforced with Nehru's visit to China in 1939.

The 28-year-old Dr. Kotnis came as a part of the five member team and stayed in China for almost 5 years working in mobile clinics to treat wounded soldiers. In 1939, he joined the Eighth Route Army (led by Mao Zedong) at the Jin-Cha-Ji border near the Wutai Mountain Area, after his efforts all across the northern China region. His job as a battlefront doctor was stressful, where there was always an acute shortage of medicines. In one long-drawn out battle against Japanese troops in 1940, Dr. Kotnis performed operations for up to 72 hours, without getting any sleep. He treated more than 800 wounded soldiers during the battle. He was eventually appointed as the Director of the Dr. Bethune International Peace Hospital named after the famous Canadian surgeon Norman Bethune.

The hardship of the stressful job as a front-line doctor finally started to take its toll on him and severely affected his health. A series of epileptic seizures killed him on 9 December 1942. At that time, Mao Zedong mourned his death by observing that "The army has lost a helping hand, the nation has lost a friend. Let us always bear in mind his internationalist spirit."

A Pro-People & Pro-Doctor Scientific Association of Government Service Doctors. It is a Common Platform for Doctors to Unite for Community Causes.

Annual General Body Meeting of Service Doctors' Forum will be held on the 25th of February, 2017 (Saturday) from 1:00 p.m. onwards. Venue:- Medical College and Hospital, Kolkata. to be announced soon. All members are requested to attend the said AGM positively. Please renew your membership if not already done.... Dr. Sajal Biswas, General Secretary